The Milwaukee Bucks are big favorites to come out of the Eastern Conference. According to Caesars Sportsbook, they enter the bubble at minus-230 to reach the NBA Finals in October.

Still, respect from Vegas is one thing, but execution in Orlando is another. While the Bucks have the league’s best record, the reigning MVP and the top defense, these guys are beatable. Just ask the defending champion Toronto Raptors, who knocked them out last year with a simple blueprint that could repeat itself this year.

With the Boston Celtics taking on the Bucks in each team’s restart debut Friday (6:30 p.m. ET on ESPN), here are the three rules any contender will have to follow to take down the seeming juggernaut in Milwaukee.

Rule 1: Keep Giannis away from the bucket

Giannis Antetokounmpo comes into the bubble as the most efficient volume scorer in the league. He’s posting an effective field goal percentage (eFG%) of 58.3% this season, the highest such mark among the NBA’s top 50 scorers.

How does he do it? Dunks and layups — lots of them. Just look at this:

More than almost any other modern superstar, Antetokounmpo dominates with one old-school shot location. His impressive overall efficiency numbers stem from his all-world abilities to attack and finish at the rack. If you can keep him out of the paint, he’s mortal. If you can’t, it’s over.

He’s basically Shaquille O’Neal in the paint but Andrew Wiggins outside of it. Shaq won four titles by dominating inside. If Milwaukee wins one this year, it will be because nobody could stifle Antetokounmpo’s interior prowess. But when the Bucks were bounced last year, Toronto did just that.

During the 2018-19 regular season, Antetokounmpo led the league by averaging 17.5 points per game in the paint. His dominance extended into the postseason, as Milwaukee went 8-1 in the first two rounds. But after Toronto head coach Nick Nurse moved Kawhi Leonard onto Giannis, the Raptors won four straight by containing the NBA’s most dangerous interior scorer.

The good news for Bucks fans is that Leonard is in Los Angeles now. The bad news is that he and the Raps gave the league a roadmap. If a team can figure out how to slow Giannis’ interior roll, history might repeat itself.

It might not be that far-fetched. Two potential second-round opponents have already found success here.

On Christmas in Philly, Giannis made just 6 of 15 paint shots as the Philadelphia 76ers beat the Bucks by 12. Brett Brown used a combination of Al Horford and Joel Embiid to defend Giannis and keep him away from the rim.

A few months later, Antetokounmpo made 5 of 10 paint shots as Bam Adebayo and the Miami Heat held Milwaukee to just 89 points in an impressive 16-point win. (If there’s one defender in the East who should scare the Bucks, it’s Adebayo.)

Milwaukee still should be favored to beat either Miami or Philly in a seven-game series, but matchups are key in the playoffs. Both teams have already shown they might be able to slow down the MVP and put the onus on Milwaukee’s secondary pieces.

Speaking of secondary options, Khris Middleton has been incredible this season. He has become a 50/40/90-type shooter, an NBA All-Star and, of course, a very wealthy man. He’s in the first year of a five-year, $178 million contract because the Bucks believe he can be a difference-maker when it matters most.

Middleton has become one of the most efficient volume shooters in the league. Just look at this: 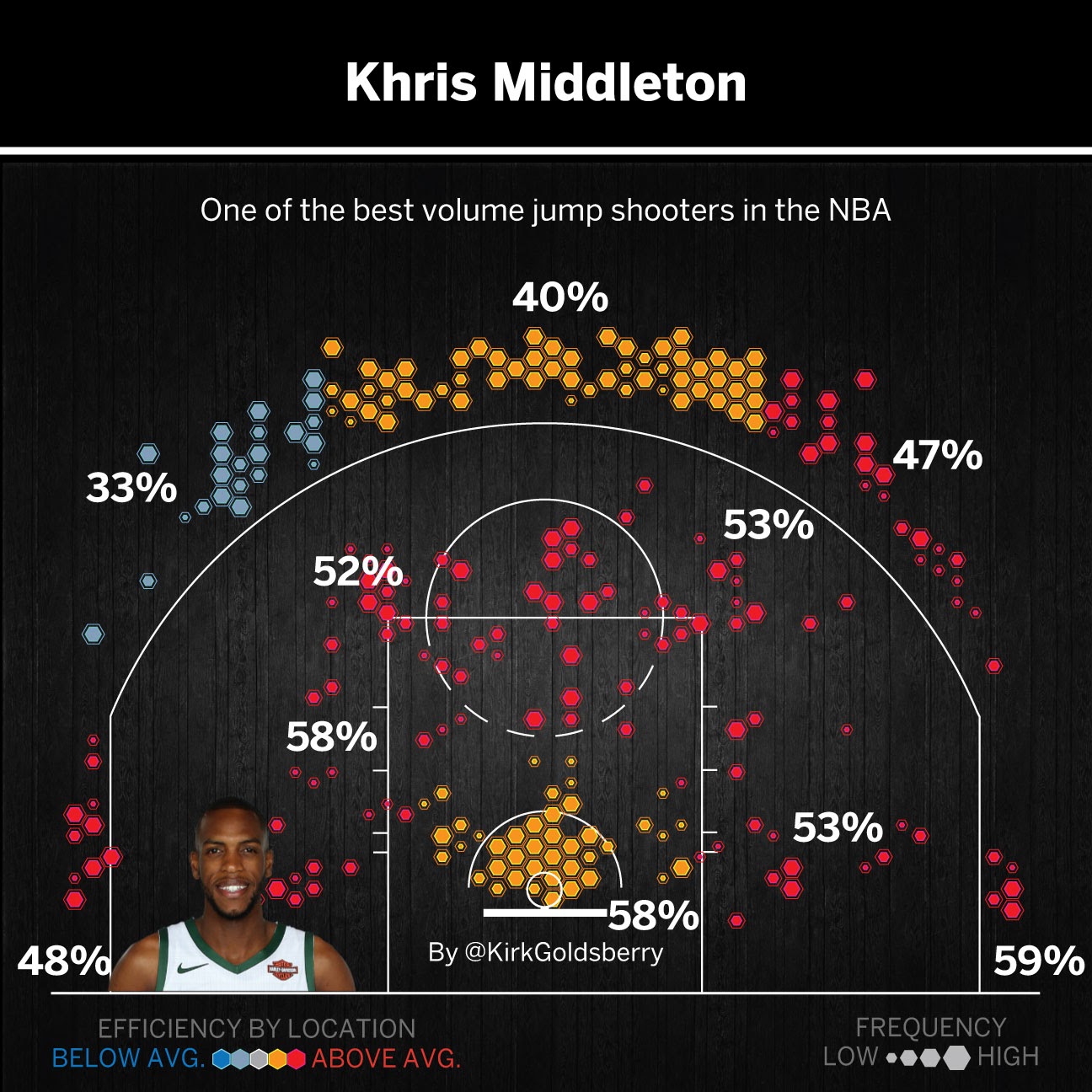 But when the Bucks needed Middleton to thrive in the Toronto series last year, he went the other way. Milwaukee gave up a chance to go up 3-0 in a six-point loss in Game 3, with Middleton shooting 3 for 16 and posting nine points in 44 minutes. Oof. Then, with the series tied 2-2 in Game 5 at home, Middleton didn’t answer, going 2-for-9 in 36 minutes. Again, the Bucks lost by six. The rest is Canadian history.

Antetokounmpo has become a perennial MVP candidate because he is the most ferocious two-way player on earth. But his case is also helped because he sometimes looks alone in big games. He can easily seem so much more valuable than any other player on his team. Middleton could definitely change that in the bubble, but you can bet Bucks opponents will design their game plans to make him prove it.

On the other end of the court, Mike Budenholzer’s top-ranked defense famously protects the rim at all costs while daring opponents to beat them with jumpers. It’s an extreme dichotomy: No team in the league has given up fewer points in the paint, and no team has given up more 3-pointers.

Their defensive philosophy is built on the premise that you cannot protect everything effectively. Given their massive frontcourt personnel in the Lopez twins and Giannis, the Bucks can dominate rim protection and the defensive glass while spending fewer resources on closeouts on the edges.

No team has given up more open 3s than the Bucks. Milwaukee has given up 1,301 3-point tries (7.6 per game) with the closest defender at least 6 feet away, per Second Spectrum tracking. While it’s a risky game to play, overall it has worked well. The Bucks have been the most efficient defense in the league in each of Budenholzer’s two seasons. But when shooters get hot, the Bucks’ defense can falter, which is what happened against the Raptors.

Go back to the final four games of those conference finals, when new dad and Canadian folk hero Fred VanVleet caught fire and made 15 of his 25 3-point attempts. That’s wild.

While VanVleet is a good 3-point shooter, he’s not Stephen Curry or Klay Thompson. Most NBA teams now have shooters capable of catching fire. All of the Bucks’ top Eastern rivals — Toronto, Boston and Miami — excel from downtown, and all of them feature snipers capable of VanVleeting for a few games, punishing Milwaukee’s tendency to give up juicy looks from downtown.

Here’s a sample of East sharpshooters and their open 3-point numbers:

The league is now chock-full of sharpshooters, but looking at that table, some teams have more guys who match up against Milwaukee’s defense better. Miami seems uniquely positioned to punish Milwaukee’s defensive approach, and that’s more than just hypothetical. Miami is 2-0 against Milwaukee this season in part because of Adebayo, and in part because its shooters have made 42% of their 3s and racked up 51 points per game from downtown in those wins.

The point is that what has happened before could happen again. Milwaukee deserves to be the favorite in the East, but the Bucks are by no means invincible. Just ask Fred VanVleet.