If the sixth-seeded Philadelphia 76ers play up to their potential, they are a legitimate title contender in the NBA’s 2019-20 restart. This team has the talent to beat any of the Milwaukee Bucks, Los Angeles Lakers and LA Clippers in a seven-game series.

But these mysterious dudes also face a gargantuan amount of unknowns. No franchise has a wider range of potential outcomes in Orlando than the Sixers, who could bounce in the middle of August and be forced to retool their team or challenge for a championship into October.

There are five key questions that will decide the fate of the most enticing dark horse among this 22-team field. Let’s run through them.

MORE: Rosters, schedules and standings projections for every team

This is sort of an obvious one, but it’s undeniably the biggest question facing this team. At 26, Embiid is among the most dominant and talented players in the East, but he has missed time in each of the past two postseasons. His health is always a concern.

When Philly came within one shot of advancing past the champion Toronto Raptors last season, Embiid was the main reason why. The Sixers posted a plus-18.6 net rating in 237 minutes with Embiid on the court, and a minus-52.5 net rating in the 99 minutes he sat out. That 71.1 point differential is equivalent to … nothing. It’s absurd. There’s no comp.

Embiid looks spry and fit in practice footage, but to quote another enigmatic Sixers great, “We talkin’ ’bout practice?” Embiid has to be available for big minutes when the real games start.

76ers center Joel Embiid explains why he believes he should be the focal point of the team’s offense when the NBA restarts in Orlando.

2. Is Ben Simmons a frontcourt player?

The big buzz coming out of Philly’s Orlando training camp is that Simmons is playing a new position, and the team is experimenting with a new starting lineup that consists of Shake Milton, Josh Richardson, Tobias Harris, Simmons and Embiid.

The hope is that this can help the Sixers find a more cohesive offense, and, well, the only way is up.

The big three of Simmons, Embiid and Al Horford has been an offensive disaster. In 429 minutes on the floor together this season, they are managing a putrid offensive rating of just 98.8. How bad is that? Out of 389 NBA trios that have played at least 400 minutes together, the Horford-Simmons-Embiid trio ranks 386th in points per 100 possessions. Not elite, folks.

But there’s some reason to be optimistic. Simmons might not be a traditional power forward, but who is these days? His speed, size and strength allow him to guard almost anyone on defense. On offense, Simmons is more Stockton than Malone, more Pippen than Barkley.

He must remain a primary playmaker for two reasons. First, he’s Philly’s best shot-creator, generating the NBA’s seventh-most uncontested shots off of passes this season, per Second Spectrum tracking data. Second, his talents are mostly wasted off the ball. In 2020, a vast majority of NBA playmakers can easily morph into off-ball spot-up threats while their teammates do work elsewhere, but not Simmons.

Check out his shot chart. Out of his 361 made shots this year, just seven have come outside the paint.

Horford’s move to the bench should free up the middle of the floor for Simmons to attack the teeth of the defense, get to the rim or find open shooters on the edges. It’s definitely worth a shot, and count me among the optimists. As long as Simmons still finds the ball in his hands, I think this will work.

Ben Simmons knocks down a couple of 3-pointers as he shoots around in the Sixers’ practice.

3. Is Shake Milton ready for this?

We already know that Milton is among the biggest steals of the 2018 NBA draft. He is a 23-year-old with wing size and point guard skills. His body is tailor-made for today’s NBA, listed at 6-foot-5 but with a wingspan over 7 feet. Oh, and he can shoot well from downtown.

Players drafted in the middle of the second round rarely crack NBA rotations, let alone starting lineups, but Milton has already done that. Still, is it really fair to expect him to thrive as a starter in the postseason in his second season, within a lineup that has yet to even play one real minute together? Maybe not, but again I’m optimistic here.

When Simmons got hurt in February, the Sixers were forced to elevate Milton’s role. He started Philly’s final eight games leading up to the stoppage and made headlines when he lit up the Clippers for 39 points in 20 shots. (Only James Harden and Russell Westbrook have scored 40 or more points against the Clips this season.)

But it’s how Milton did it that got everybody in Philly excited. He went 7-for-9 from downtown (the Sixers need shooting) and torched the Clippers on pick-and-rolls (the Sixers need another ball handler). That night, Milton displayed an impressive array of rim attacks and off-the-bounce jumpers. He looked like a featured contributor against one of the most formidable defenses in the league. Second-rounders aren’t supposed to do that.

Milton is another G League success story, honing his craft last season getting reps at point guard in Delaware, where he averaged 25 points and 5 assists in a high usage-role. But in the bubble, Milton will be a lower-usage perimeter player, and his catch-and-shoot skills will be key.

And dude can flat-out shoot. He hit more than 42% of his 3s in each of his three seasons at SMU. He’s doing it again this season in the NBA, converting 45% of 106 attempts. As he gets more minutes next to Simmons and Embiid, it’s fair to assume he’ll get tasty looks and immediately enhance Philly’s mediocre perimeter production.

I’m sold on Milton. The bigger question here is how did this guy slip to the second round?

76ers guard Shake Milton describes his emotions after his career night vs. the Clippers and his thoughts on when Brett Brown took him out of the rotation.

4. Can Al Horford thrive in a bench role?

Philly’s current roster vibes can be summed up by the fact that Sixers fans seem way more excited about Milton than they do about Horford. Horford is a five-time All-Star and the team’s shiny offseason acquisition from last summer. Milton was the No. 54 pick in the 2018 draft and has started 19 games in his two-year career. But here we are.

Instead of replacing the perimeter holes left by JJ Redick and Jimmy Butler, the Sixers’ front office opted to get bigger (and get older) by offering Horford a four-year, $97 million deal. But going bigger hasn’t worked.

Philly’s net rating in the 535 minutes that Embiid and Horford have shared the floor is minus-1.3. There are too many cooks in that kitchen, and the food is gross. If we’re now supposed to look at Simmons as a power forward, you can argue that Philly’s front office has four bigs clogging up the top four spots of its cap sheet.

Regardless, there’s still a chance to salvage this. The Sixers’ lack of a bench cost them a chance at a title last year. James Ennis III and Mike Scott both post net ratings of around plus-2.0 in the 2019 playoffs. The rest of Philly’s bench rotation had a minus-15.0 net rating or worse. Yikes.

If Horford can provide the second unit with some leadership and production, he could help ensure that serious flaw doesn’t repeat in the 2020 bubble. But while Horford is by no means washed up, it remains to be seen if he can thrive in a secondary role.

Tobis Harris seals his defender and gets the feed from Al Horford for the dunk.

While Milton, Embiid and Simmons have been the talk of the bubble, Philly needs its other starters to step up, too.

One reason the Sixers rank 18th in the league in offense is their meager 3-point shooting. They rank dead last in the NBA in unassisted 3-pointers and rely heavily on catch-and-shoot opportunities, largely generated by Simmons, per Second Spectrum. Milton will help, but Richardson needs to be a more reliable spot-up threat. He’s making less than 34% of his catch-and-shoot 3s this year (the NBA average is 36.9%), and Philly can’t capitalize on Simmons’ all-world creation if their starting shooting guard can’t knock down shots. 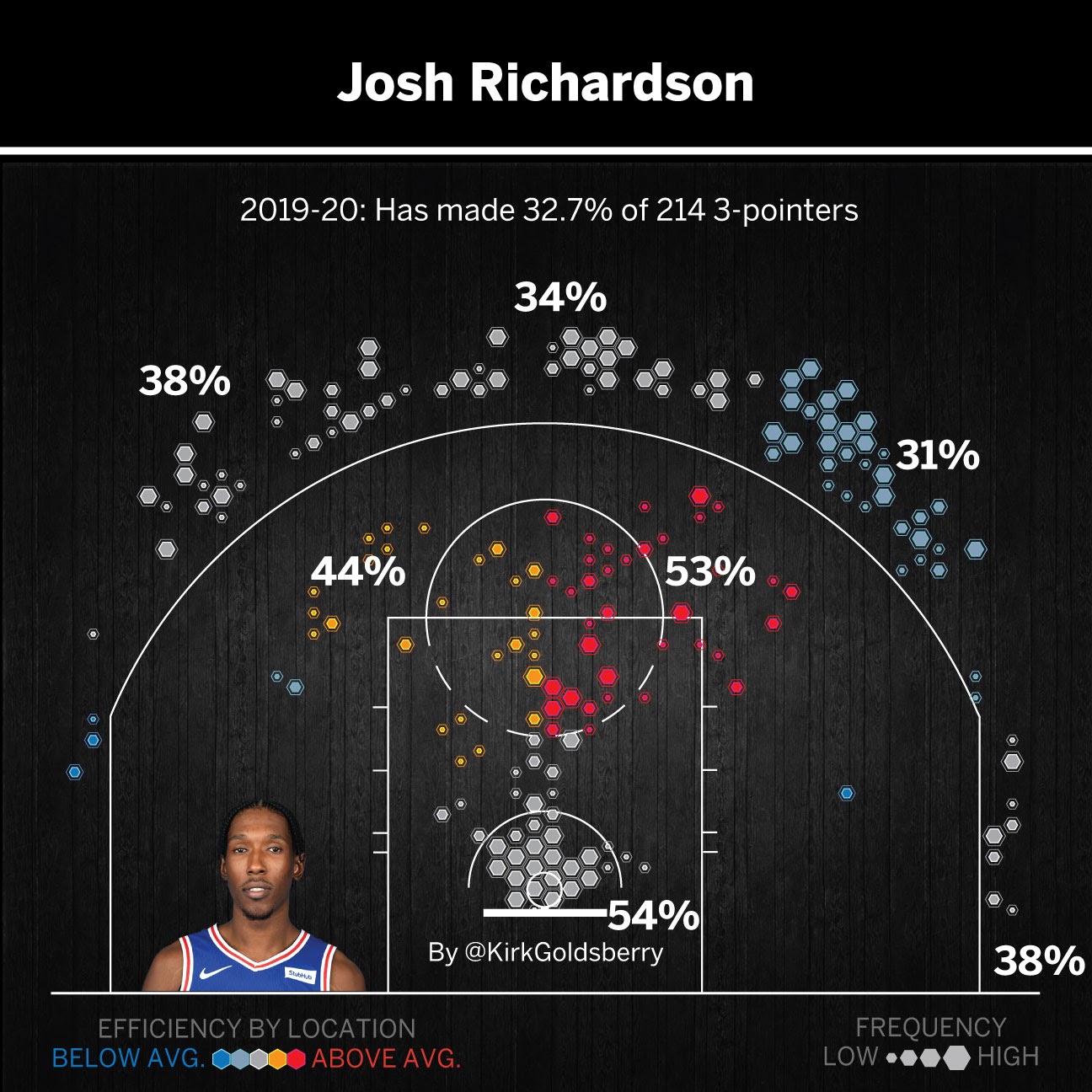 The same goes for Harris, who is in the first year of a five-year, $180 million contract. He is talented enough to create his own looks, but he can also thrive off the ball and provide spacing. As the team’s second-leading scorer, he’s vital, but in last season’s make-or-break series against Toronto, Harris wasn’t good enough.

Harris’ production caved when it counted. He failed to score more than 16 points in any of the seven games against the Raptors, making just 38% of his shots and 29% of his 3s. Yuck. He has to be better this time around, and he should be.

The Sixers need a fresh start, and Orlando gives them one. This team, swirling with questions, is right at home in a bubble environment with loads of uncertainty. Yes, it takes something close to blind faith to imagine a world in which the Sixers suddenly come together and reach their potential. But if this group stays healthy and gets strong performances from their most important players, they are the most dangerous underdog in the restart. Don’t count them out.